Aid your health and wellbeing

The word Shiatsu means finger pressure in Japanese. It describes a form of hands-on healing which, along with massage, Acupuncture and Herbalism, has been an integral part of traditional Chinese and Japanese medicine for centuries. Shiatsu is a form of hands-on healing which uses a range of massage, physiotherapy and osteopathy techniques. It is sometimes described as Japanese physiotherapy.

The history of Shiatsu 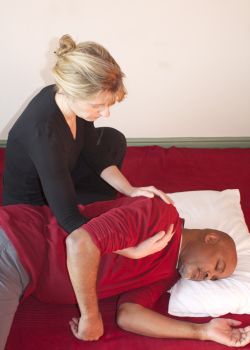 Following the introduction of Chinese Medicine into Japan in the 6th century AD the Japanese refined Chinese massage techniques into a practice of massage known as Anma, which was officially recognized by the Japanese medical authorities in the 8th century AD. Over the centuries it lost its popularity, but was revived and reintroduced into medical studies in the late 1800s.

During the twentieth century, Shiatsu distinguished itself from Anma through the merging of Western knowledge of anatomy, acupressure, and a variety of eastern healing practices. Shiatsu established itself in Japan though the work of Tamai Tempaku, and Tokujiro Namikoshi and the Shiatsu Therapists Association was founded in 1925. In the following decades students of Tempaku began developing offshoots of Shiatsu. By 1955, the Japanese Ministry of Health and Welfare acknowledged Shiatsu as a beneficial treatment, and licensing was established for practitioners.

Tokujiro Namikoshi is most responsible for the worldwide recognition of Shiatsu. He created a system of bodywork based on modern Western anatomy, physiology and pathology and concentrated on applying pressure to reflex points that relate to the central and autonomic nervous system rather than to the classical meridians. In 1940 he opened the Nippon Shiatsu Institute in Tokyo, now known as Japan’s Shiatsu College. Shiatsu thus emerged as a form of manual therapy incorporating gentle manipulations and stretches derived from newer disciplines such as Japanese physiotherapy, osteopathy and chiropractic, with pressure techniques exerted through the fingers or thumbs.

In Japan today there are two main forms of Shiatsu; one developed by Tokujiro Namikoshi and another by his former student Shizuto Masunaga. Masunaga’s method combines Western physiology and osteopathy and Japanese physiotherapy techniques with traditional Chinese Medicine principles, and is known as Zen Shiatsu. I practice Zen Shiatsu.

Learn about how Shiatsu can benefit you here…

Not found what you are looking for? Search here

This website uses cookies to improve your experience. We'll assume you're ok with this, but you can opt-out if you wish.Accept Read More